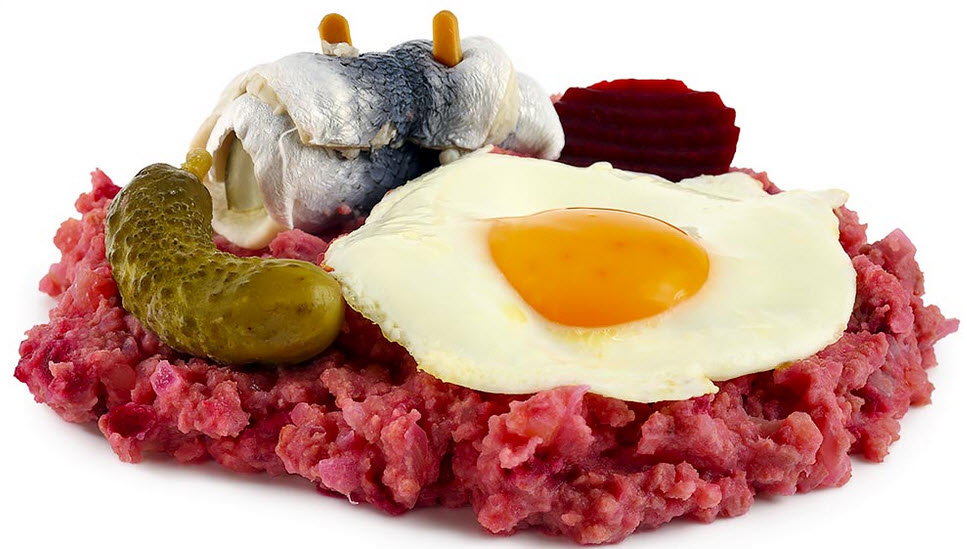 Labskaus is a dish associated with Northern Germany, especially Hamburg, Bremen and Lübeck, from whence it spread with sailors to other ports in Northern Europe, especially around the Baltic Sea.

It is a hearty dish based on salted meat or corned beef + root vegetables, onions and pickled gherkin. Nowadays, it is usually prepared using potatoes. Some recipes include herring, either mixed into the Labskaus or as a side order.

Each year, there is a big labskaus festival in the German port town of Wilhelmshaven. For the festival, the town produces more than three tonnes of labskaus. The labskaus is eaten accompanied by sea shanties played by bands and sung by choirs.

Onboard ships in Northern Europe, where root vegetables and salted meats were staples, the labskaus was an easy way of preparing dinner and making the ingredients more tasty. In many cases, all the ingredients would be prepared in the same pot – not separately as we have done in the recipe above. The meat would be boiled in broth and then minced in with beetroot, onion, boiled potatoes and herring. Finally, the base would be fried in lard.

The English variety is known as lobscouse or just scouse. It might be the reason why Liverpool residents are known as scousers. (Liverpool is a port town.) In addition to beef, mutton is a very common source of protein in lobscouse, reflecting the traditional prevalence of sheep raising on the British Isles.

Norwegian lapskaus differs from most other varieties by containing diced carrots, which makes the dish look more orangey-brown than the pink color provided by red beets. Gravy is popular. In some Norwegian recipes, turnips are included.

In Denmark, skipperlabskovs is sometimes served with gravy.

The Danish name for this dish puts an emphasis on its ties to seafaring (skipperlabskovs).

Swedish lapskojs is typically made using salted beef or pork. Some recipes contains boiled oxen meat and diced streaky bacon instead. Parsley is a popular garnish.

In Finland, dried potato flakes are often used to prepare lapskoussi in situations where bringing whole potatoes would be too cumbersome.